The 8th symposium of sculpture in Korça, held annually, brought forth a Symposium of Architecture – the first of its kind in Albania.

Pavilion Days in Korca 2017 is the first Architectural Symposium in Albania, bringing together architects and sculptors for a unique artistic product.

This symposium helps the city of Korça in building a new and contemporary tradition, on the continuation of sculpture symposiums.

Korça can become a pioneer not only in Albania, but also in the region, in:- Promotion of architectural and contemporary art values, serving the citizens;

– Experimentation on the artistically and architectonic composition, on design and construction technics; After many years of cultivating and promoting sculpture as public art, and after many initiatives of regenerating public spaces via architecture, Korça makes an appropriate place, where this interdisciplinary dialogue can be situated and materialized.

This dialogue is set on a common ground, for communicating, for creating: Pavilion Days in Korça through Modeling the Idea. A certain activity, which might be repeated, can become an extremely important value and attraction point to a city and cultural center such as Korça, where the relationship of building is experienced as an important part of the urban aesthetics. The symposium aims the creation of sculpture and architecture artifacts.

In one of the public areas of the city there will be installed 5 sculptures and 4 light structures – Pavilions. Throughout this confrontation it is conveyed the sensibility which find roots at the urban aesthetics values in Korça. Beyond the realization of the artifacts, the event aims to create discussion spaces among architects, sculptors academics and students opened for public participation.
4 Architects will decide on their relation, to create their own works communicating with the sculpture at the assigned lot in the Park of the city. Each architect will receive the sketch idea of from one sculptor. The Pavilion design is expected to take root on the kind of relation with the sculpture.
Public spaces in Korça, preferably undesigned/unplanned parks, which make up the infantile setting for the authors’ assignment, and also profit from their revitalizing interventions.The idea is to establish a certain dialogue between the two artifacts and to confront the two disciplines in their relation to the public.
The activity will take place in a 10-day schedule. During these days event architects will have the support of 2 architecture students, and a technical staff, made available by the construction companies. At every end of the day, in a space where public participation is made possible, an architect and a sculptor will be part of a platform to generate discussions on themes and topics in relation to relevant activities and the everyday life of the city.

– To alter an undefined space, in a place dedicated to a distinct character. This character is free to be defined/ set by the artist and the architect, who will transmit their concrete message;

– The pavilion situated in the city park, must create a spatial dialogue by building a relation with the public, the visitor, or the user.During the 7 days of the symposium, the following activities will be developed in parallel to the project ideas: 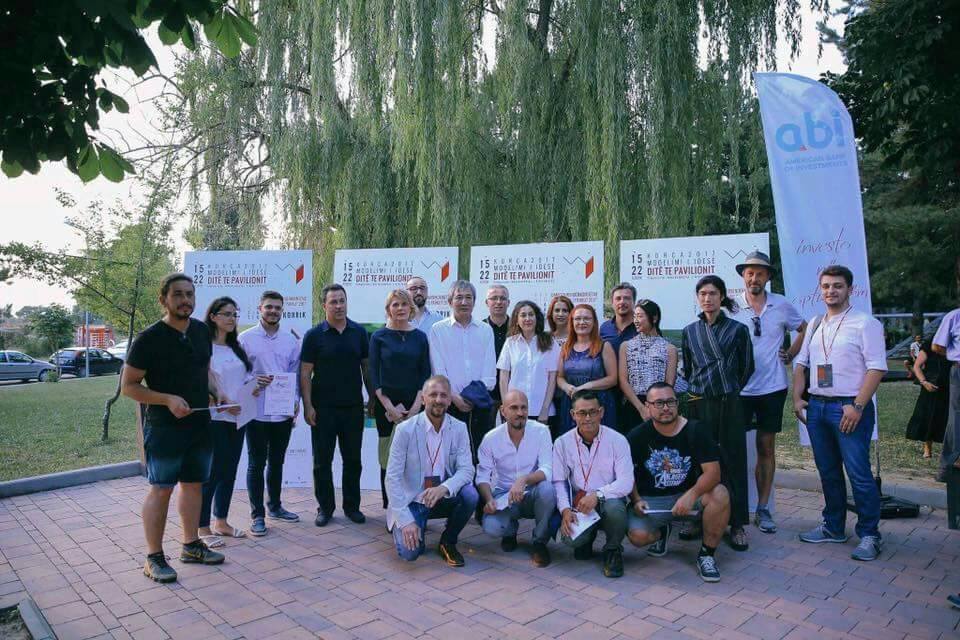 Korça, with its continuous trials in establishing and promoting sculpture as a successful form of public art, and with initiatives in regenerating public spaces through architecture, was the perfect host for the dialogue between the two disciplines. It encouraged the fruitful work between four renowned foreign and local architects and five internationally recognized sculptors. 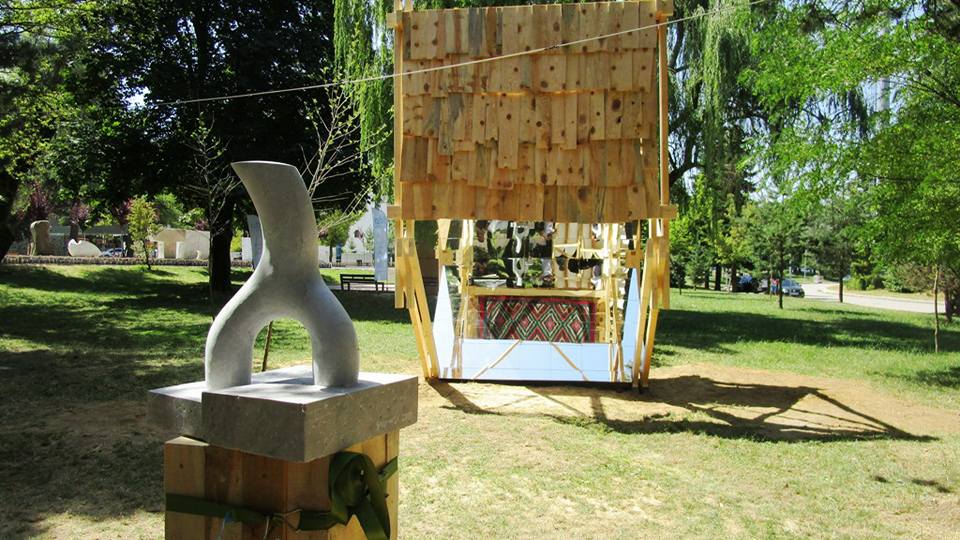 Dutch Architect, Martin Sobota, with Back to The Roots, reimagines a pavilion that teases the eye with a mirror which places the viewer inverted with the surroundings.The structure made of light wood, seems to be grown towards the ground, while a carpet – traditional of Korça’s identity, questions the past as in relation to the contemporary. The Taiwanese artist, Chang Shu Wei’s The Recollection of Tree, pins the tree upside down, with its root at the top. 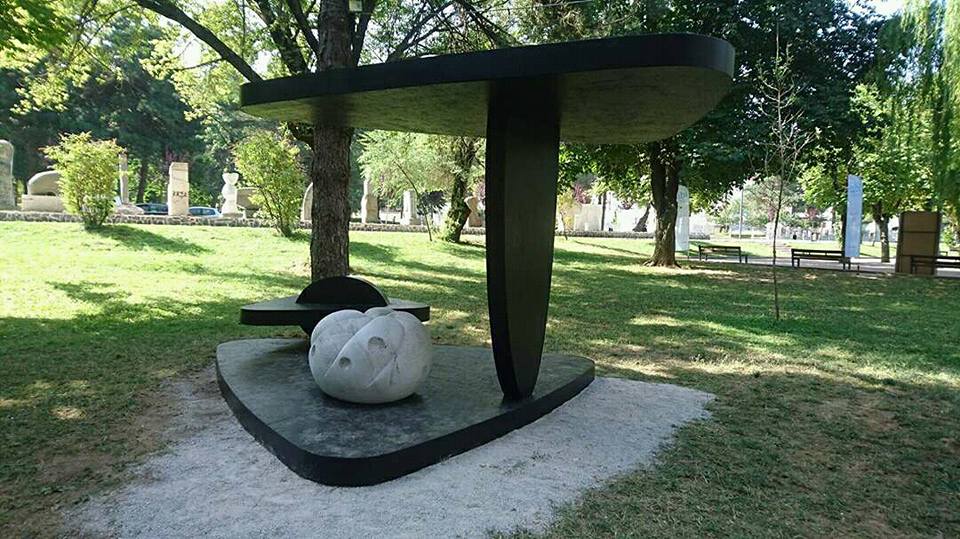 The Albanian architect, Dorian Tytymçe, brought life under the Tree Pavilion – ideated as an open room within the park. The open structure, consisting of a tree and five “petals” of wood, represents the basic elements of architecture and welcomes everyone to interact – as children and passersby take a seat under its shade. It complements the sculpture by the South-Korean sculptor, Jina Lee, whose work, Ying & Yang, combines six organic shapes to create one unified form. 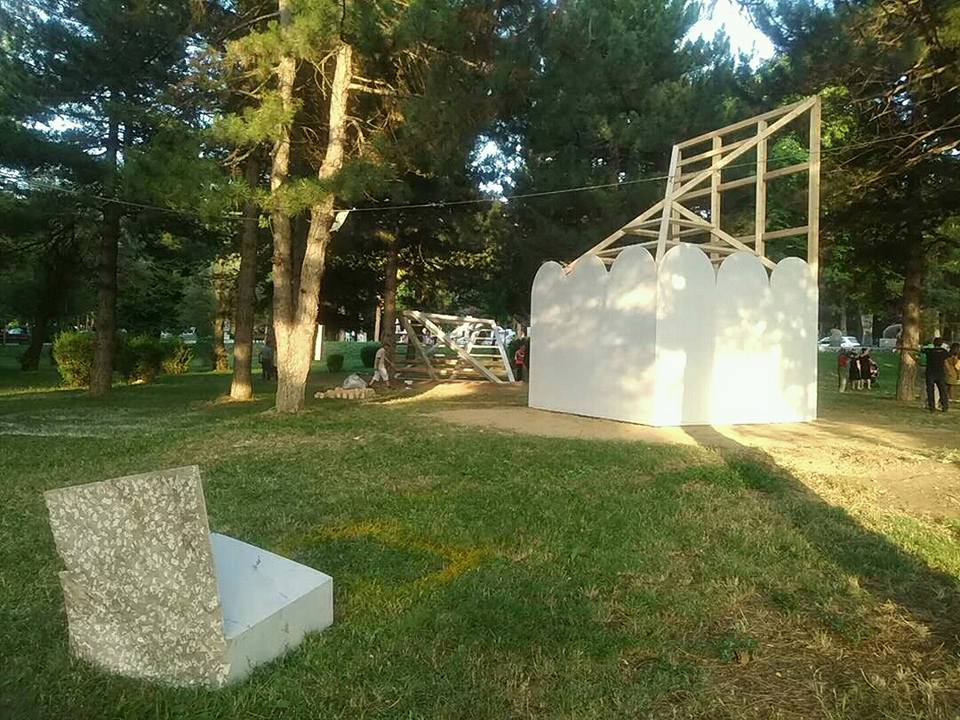 The Italian architect, Francesca Benedetto with The Living Diorama Pavilion, encloses a garden and displays different activities where architecture, nature and the life of the city coexist. The living diorama contains a living landscape within a timber structure.

Japanese sculptor Takeshi Kubo, presents his sculpture Concert of Shadow and Shape, where the form is made of shadows, lights and the air

The Turkish architect, Arman Akdogan, with the Tangled Up Pavilion brings an architectural intervention in the park, breaking the green monotony. Paired with two opposite directional seat slopes facing one another, it encourages encounters and socializing.

Jiang Chu, from China, with Twisted Solidity, positioned just in front, presents a sculpture where architecture’s purpose is socializing. 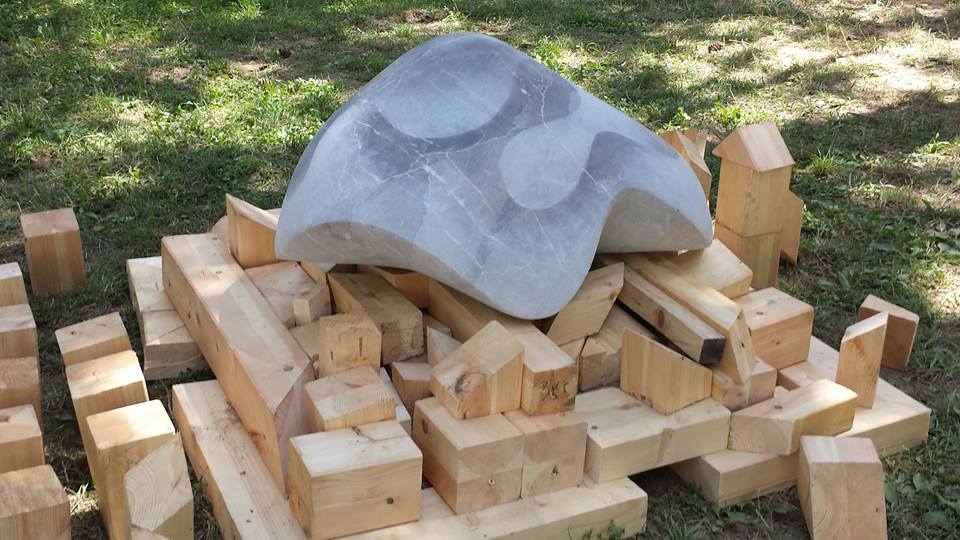 – Japanese artist’s, Kei Nakamura’s work, The Origin of The Stone, derives inspiration from a farm of plankton, and represents the origin of calcareous stone. 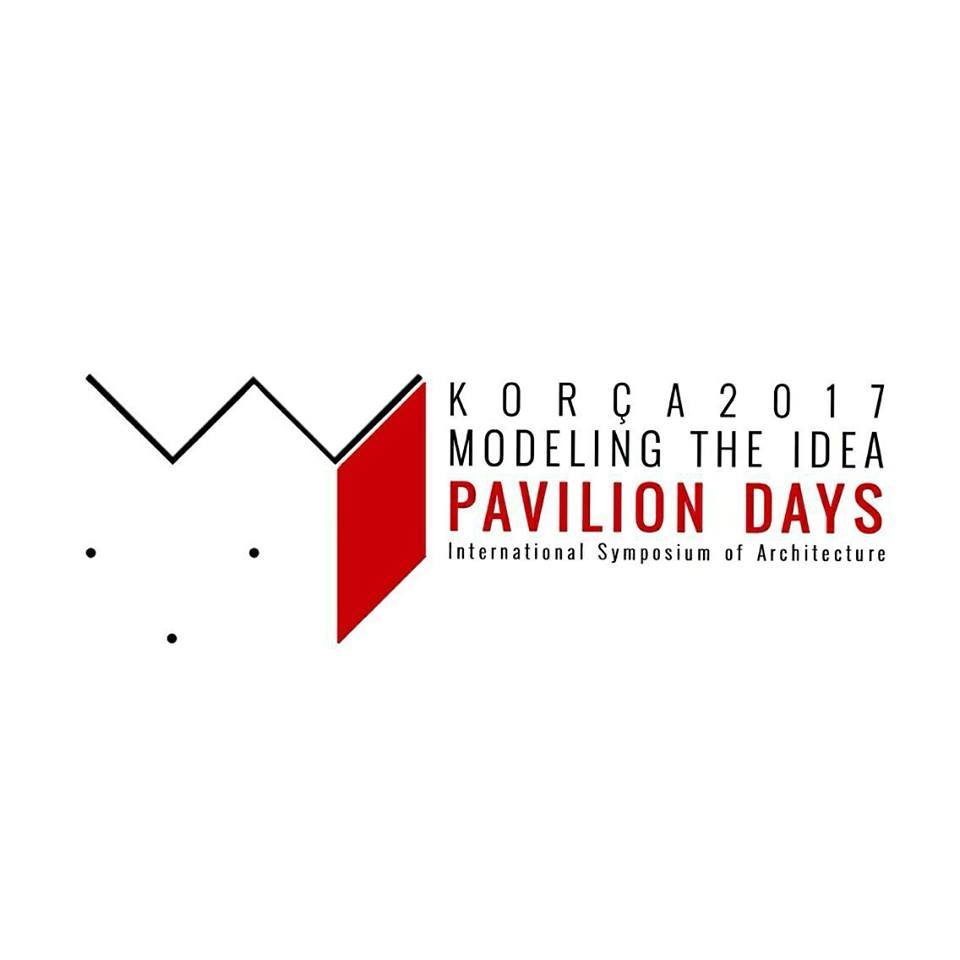 The event was further enriched with public lectures – by the architects and sculptors, presenting their previous works and visions; workshops – where local architecture students had the opportunity to learn, research and later on document the findings in a booklet to be published in the future; and presentations where discussions were generated.This event curated by architect Jurtin Hajro, sculptor Genti Tavanxhiu, and advisor Blerina Mali – was supported by the Municipality of Korca, the Ministry of Culture, and The Embassy of the Netherlands in Albania. 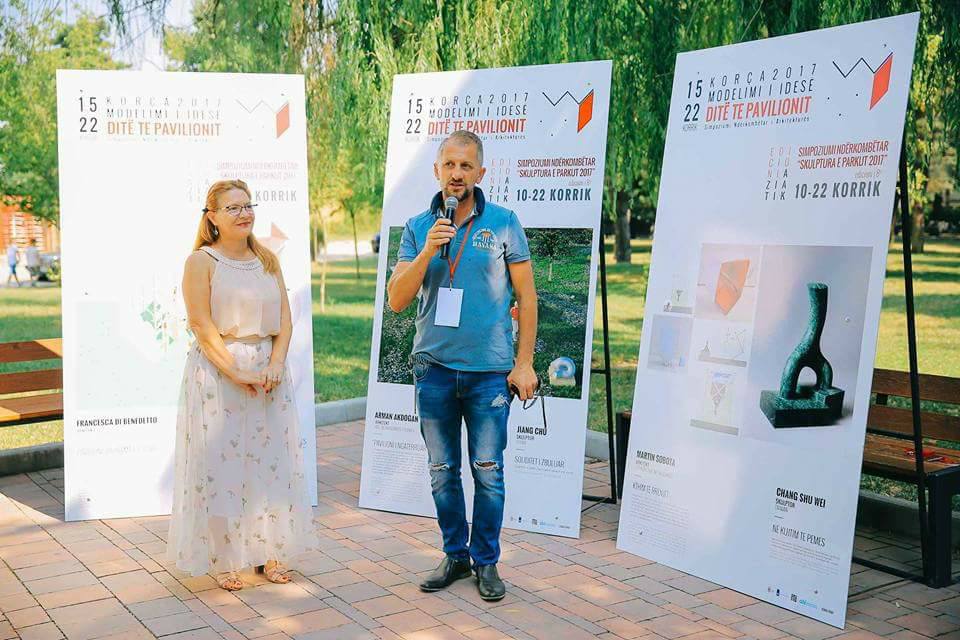 Genti Tavanxhiu – Curator and organizator  of Sculpture Symposium in Korça (Albania) 2017  , he was born in 1973 in Shkodra (Albania) and established his personal sculpture atelier in Italy since 1993. He is the AIESM (International Association for Monumental Sculpture Events) manager in Albania and agent in Italy as well as an ISSA (International Sculpture Symposium Alliance) member in Tongling, China. For the past two decades has been part of important national and international exhibitions, being awarded several prizes. Tavanxhiu organized, coordinated and directed eight international sculpture symposiums in Korça (Albania), one in Elbasan (Albania) and three symposiums in travertine, in Spinetoli (Italy), and for the first time on the story of Albania the organized the Architecture Symposium. On 2018 he is part of the  team that are going to present The Albania Pavilion at The International Architecture Biennale of Venice (Italy). His monumental sculptures are present in many public places and private collections in USA, Albania, Germany, Spain, Portugal, Switzerland, Italy, France, Romania, Montenegro, Cyprus, Turkey, United Arab Emirates, China, Japan, Egypt, Syria, Iran, Israel, and Tawain. 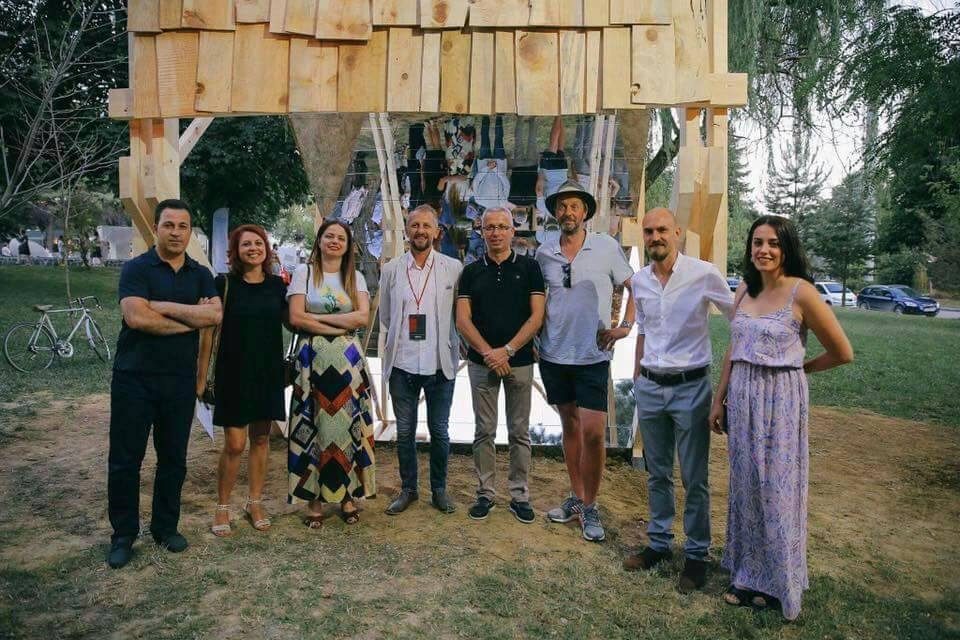 Jurtin Hajro – Curator of the 1°International Architecture Symposium in Korça (Albania) 2017. He is the founder of commonsense.studio, an architectural practice based in Tirana. Actually he is a part time a professor in the Department of Architecture at Epoka University in Tirana, Albania, where he has taught for 6 years and established and was the first director of CoRDA – Center of Research and Design in Architecture. He received his Bachelor and Master courses in Architectural Design at the Middle East Technical University – Ankara, following experiences as an assistant researcher in the same university. Among others he is the architect of Epoka Social Center, completed during his direction at CoRDA, a building that has received international attention in award nominations and academic publications. Recently, July 2017, he was the curator, together with Genti Tavanxhiu, of the first Architectural International Symposium in Albania, Modeling the Idea – Pavilion Days in Korca.